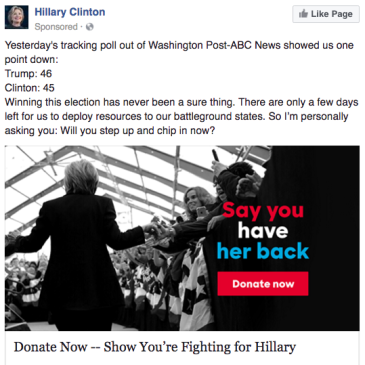 Updating from yesterday. Even the Clinton Campaign is trying to present the tightening of polling as a reason to contribute to her campaign. She’s actually advertising that her opponent is WINNING based on a single polling data point despite the fact that an average of polling shows her well ahead, especially if you dismiss the … END_OF_DOCUMENT_TOKEN_TO_BE_REPLACED 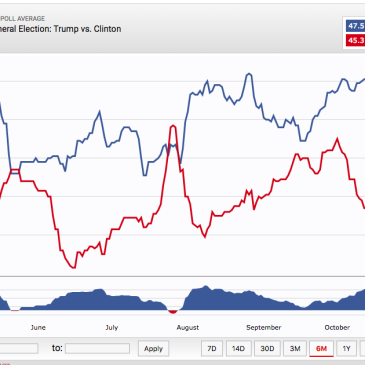 Regardless of political leanings the headlines this week are full of stories about how Clinton’s lead in the polls has “vanished,” to quote Right Wing mouthpiece Breitbart.com or this Politico story spinning a story about Trump falling “back in love with the polls” after the race tightens back up. We even see Nate Silver’s FiveThirtyEight … END_OF_DOCUMENT_TOKEN_TO_BE_REPLACED 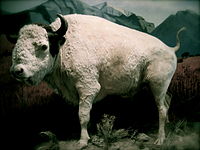 I’m going to climb way out on a limb here and make a prediction about what the FBI discovers when they dig into the matter of the Abedin email “trove” discovered on Anthony Weiner’s laptop. Huma is reportedly mystified about how thousands of HER emails ended up on HIS laptop. This is pure speculation but … END_OF_DOCUMENT_TOKEN_TO_BE_REPLACED 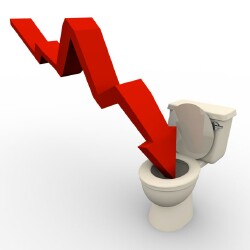 Stories like this CNN piece about early voting habits are getting caught in the fallacy of assuming that voting in the presidential election will break along party registration lines. So they’re reporting, for example, that in Arizona 164,000 Democrats have cast early ballots compared to 160,000 Republicans. But that’s almost meaningless, given the rupture in the … END_OF_DOCUMENT_TOKEN_TO_BE_REPLACED

This is a topic close to my heart. One of my first really difficult jobs in the strategic communications world was designing ways to encourage and support FARC rank-and-file soldiers in Colombia to demobilize. It’s very difficult to bring someone to the point of walking away from not just an ideology but a way of … END_OF_DOCUMENT_TOKEN_TO_BE_REPLACED

If you’ve ever watched even a single episode of a reality TV show like Master Chef, America’s Top Model and, yes, The Apprentice you’ve seen the signs that someone is about to get fired or voted off the island. In the jargon of TV production that’s the Loser Edit. What starts with little observed stumbles … END_OF_DOCUMENT_TOKEN_TO_BE_REPLACED

Former House Speaker and Wrestling Coach Dennis Hastert Reports to Federal Prison It’s been amusing to watch the dance as Republican candidates try to put daylight between themselves and the now-toxic candidacy of Donald Trump. One might imagine it would be easy, in the wake of Trump’s “grab them by the pussy” bombshell video, for … END_OF_DOCUMENT_TOKEN_TO_BE_REPLACED

It will come as little surprise to anyone who regularly interfaces with reporters that the NYT botched its reporting on the San Bernardino shooting when it reported, initially, that shooter Tashfeen Malik had openly posted pro-Jihad and radical Islamic statements on social media. The original story, reported by Mike Schmidt and Matt Apuzzo, who cover national … END_OF_DOCUMENT_TOKEN_TO_BE_REPLACED