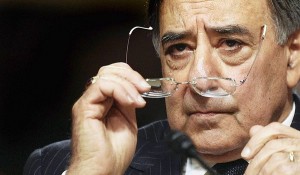 Today’s Los Angeles Times has a big headline “Defense Chief Leon Panetta’s Commute Raises Eyebrows.”  Defense Secretary Panetta, who is from Carmel California, generally flies home on weekends instead of staying in Washington DC. Of course, being the Secretary of Defense, he is on duty 24/7 and doesn’t go ANYWHERE without an insane amount of secure communications infrastructure.

However someone at the Pentagon is trying to make an issue of Panetta traveling home on weekends, as if that means he’s some slacker disconnecting from his duties at 4 PM on Friday.

The most shameful bit from a journalistic standpoint is that the story doesn’t sustain the premise of the headline. There is not a single attributed source in this story saying that they think it’s a problem for Panetta to travel. In fact, there’s not even an anonymous source quoted.  There are, however, several official sources saying that the Secretary is constantly in touch and doing his job well. So who’s eyebrows are being raised? And why wasn’t this “eyebrow raising” a problem during Panetta’s two years in charge of the CIA?

Mostly I wonder why is the LA Times providing a platform for this kind of anonymous sniping?