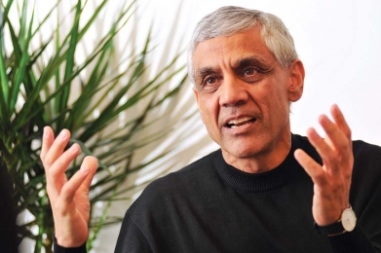 Billionaire tech investor Vin Khosla is known for playing his cards pretty close to the vest. In a business filed with big egos and big mouths, he’s not one known for courting public attention. This explains his desire to keep his name out of the dispute over Martin’s Beach, an oceanfront property south of San Francisco that he bought through shell companies in 2008 and then closed to public access. When a group of beach goers and surfers sued to maintain the previous open public access, lawyers for the two shell companies attempted to shield the property’s true ownership and only admitted under court order last fall that the property belonged to Khosla. Then the lawyers tried to keep him off the witness  stand in the lawsuits, only to see him forced by another court order to testify.

Suddenly, within weeks, a man used to being named on Vanity Fair’s “Most Influential” and “New Establishment” lists as a green entrepreneur and social progressive, sees his name in headlines about him excluding the surfers, bird watchers, and little kids with sand pails who’ve used the beach for generations from going there, just because he says so. Not great personal PR. Nobody likes to see their public image go from a green hero to Mr. Burns from the Simpsons in just a couple media cycles. It’s natural to want to make that go away.

When my clients are at the center of a lot of negative media attention they always ask me how to make it go away. People are particularly sensitive to how they are portrayed in Google results for searches on their name. Nobody wants to become the next “Santorum”. While a person or company can spend a LOT of money on SEO and back end trickery, the brutal truth is that the only thing that will make a high volume of bad news disappear off the first page of Google’s search results to the wilderness of page 2 and 3, is for you to go out and make OTHER news. It doesn’t even have to be good news. Just better and fresher news than whatever is making you look bad at the moment. It can even be controversial, as long as it’s a controversy that you feel okay with and isn’t personally damaging.

First, let me say that I don’t know who is advising Khosla and his legal team on communications strategy. But in the few weeks since he was forced to take the stand in the Martin’s Beach trial, Khosla has suddenly been very public and vocal in his opinions about a lot of other things that sure seem like nothing but click bait to drive search results.

Interested in what a billionaire thinks about San Francisco apartment rents? He’ll tell you. San Francisco rents ARE outrageous. Nothing controversial there. But saying so makes him appear in touch with the common man. No matter that he’s not really even in the rental market.

And Khosla again goes on the record with his previously controversial opinions about computers replacing doctors because, you know, who is really that happy with their medical care? And any medical care controversy is good news.

Finally he tells some reporters that he blames tech for increasing the income gap and that the solution lies in taxing the ultra-rich more than 50% of their income. What a guy!

What are the signs that this is a deliberate charm campaign? Well, the best way is often to look at what the same person was doing in the recent past, before the controversy. Have a look: Search results on the term “Vinod Khosla” for the two month period of April 20, 2013 to June 20, 2013. 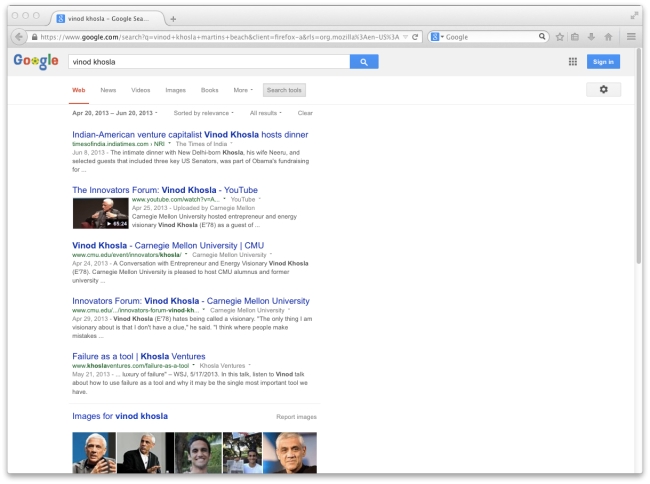 Result #1: India Times article about Khosla hosting dinner for President Obama. That’s pretty good personal PR. I know my friends would think I was cool if I could host the President and three senators for dinner at my house.

Nothing about SF rents, taxes, computers vs. doctors. And nothing about Martin’s Beach. Because he wasn’t outed as the owner yet. Nothing controversial at all. 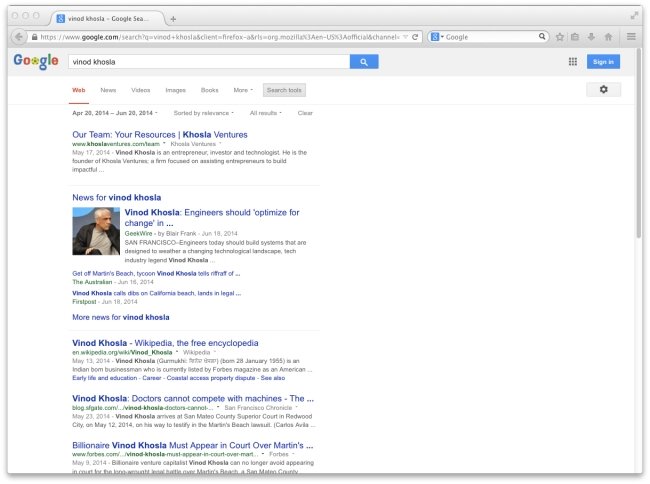 #1 Google result: Khosla Ventures website.This is surely the payoff of good and expensive SEO work.
#2. Google Result: Geekwire article quoting Khosla at a conference saying ““I think we have to re-engineer engineering itself to optimize for change.” That’s pretty visionary stuff for a non-visionary.
#3 and #4 search results have to do with Martin’s Beach controversy.
#5. The bit about doctors cannot compete with machines.

Still some work to do there, but getting at least 1/2 the results to be about things besides a billionaire locking the general public off a public beach is progress.

Khosla’s key problem remains, however. You can push negative results off the front page of Google with other news as long as you STOP CREATING BAD NEWS. But as long as he continues to lobby in Sacramento against public access to the beach, and to litigate to keep the gates locked, the media is going to keep coming back. And so will the embarrassing front page Google results that clash with his prior image as a socially progressive, green entrepreneur. “Billionaire Locks Out the Public” is too sexy of a story for it to just fade away.